How To Make Pumpkin Spice Syrup

There’s something about sweater weather that makes us all crave a specific flavor… pumpkin spice! And no, we’re not referring to pumpkin pie. The infamous Starbucks Pumpkin Spice Latte has been all the rave for years now, and many of us can't get enough of it. If you’re like us, and want the luxury of on-demand Pumpkin Spice Lattes without the inconvenience (and expense) of daily Starbucks runs, you’ll love this easy pumpkin spice syrup recipe.

Using the Ultimate LĒVO II Bundle, you have all the tools you need to make infused simple syrups at home. Simply drop some into your regular latte, and voila! Keep reading to learn how to make your own pumpkin spice syrup for unlimited Pumpkin Spice Lattes. The History of Pumpkin Spice

It will come as no surprise (we hope) that Starbucks didn’t invent “pumpkin spice”. Before the sensation of the Starbucks pumpkin spice latte, “pumpkin spice” was a humble combination of spices used in baking pumpkin pie. The flavors were a mix of nutmeg, cinnamon, allspice, ginger, and cloves. This tradition goes back to early America—we’re talking 1700s people!

Beginning in the 1930s, spice manufacturers began selling “Pumpkin Pie Spice” on its own. This was a pre-blended pumpkin spice mixture that made it one-step easier to make pumpkin pie. Today, the Pumpkin Spice Latte is Starbucks’ most popular seasonal beverage of all time. It’s available around the world on its seasonal menu, and has been sold more than 424 million times and counting. That number doesn’t include people that have tried to replicate the sensational drink at home (like what we are about to do!).

You might be curious how it’s possible to recreate the Pumpkin Spice Latte craze from your own kitchen. How can I get all the ratios right? How can I recreate that special flavor? Well, it’s all about using real pumpkin! Like we mentioned earlier, it wasn’t until 2015 that Starbucks realized adding in real pumpkin to their lattes took the flavoring to the next level. We’re not going to make the same mistake by keeping it out.

We fulfill our pumpkin quota by using pumpkin puree. And our sweetness quota? Simple syrup.

But, psst. There are more secrets! Mainly, we *infuse* the spice into the pumpkin puree and simple syrup to give it that smooth, consistent flavor. If you’re wondering how in the world it’s possible to infuse spices into pumpkin, we’ll explain!

How To Infuse Spices Into Pumpkin

We infuse the pumpkin spice syrup using a LĒVO infusion machine. LĒVO is an innovative kitchen device that simplifies the process of at-home infusion so you don’t have to be a genius to do it! Normally, infusions take weeks to accomplish, and if you want to speed up the process, you have to be really careful to use the proper temperatures to avoid burning your precious infusions.

LĒVO isn’t just helpful for making infused pumpkin spice syrup—you can infuse all sorts of concoctions for delicious drinks and foods. LĒVO makes it simple to infuse any herb, spice, or nut into practically any liquid. That means you can make lavender simple syrup, rosemary olive oil, garlic + basil avocado oil, and tons more. You can even infuse chocolate, caramel, and make your own chocolate chip cookie edibles! If you’re intrigued, learn more about LĒVO. In the meantime, check out some more pumpkin recipes from LĒVO below:

Once you make your pumpkin spice syrup, it will be key to store it properly. This recipe will leave you with 16 servings of pumpkin spice syrup to go around. While your fam, coworkers, or friends might initially love it if you gave them some, you’re going to need a storage plan so it won’t go bad. Our advice? Use LĒVO Herb Blocks and pop them in the fridge (or freezer). These herb block trays make it super easy to keep your infused syrups fresh and organized. The blocks resemble ice trays, but come with an airtight lid to keep unwanted air out of there. Each block is around 2oz, the perfect size to plop into your lattes.

Alright, enough logistics. Let’s get to the recipe!

Ditch the Starbucks line and make your own pumpkin spice latte syrup from home with LĒVO. 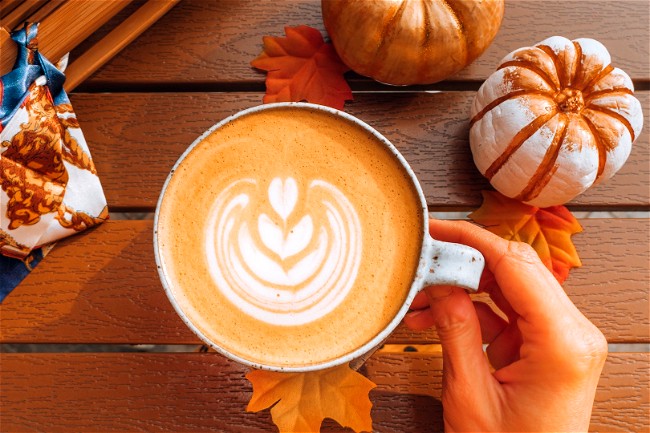 Infused edibles continue to crowd selected retail shelves across the nation (in the states where they are currently legal.)  However, many customer... If you are looking for a simple herb-infused recipe, try chocolate-covered strawberries. An herb-infused chocolate coating makes this classic, deca... If you have a nostalgic craving for a dessert-like chocolate pudding, you might consider taking it to the next level with a medicated botanical inf...